Linework for the Survey Area¶

Initial Linework in QGIS is started by surveyor with the knowledge from the Field. For this step, points are simply imported into the QGIS from the field text file (.csv or .txt). CRS needs to be TM-AUSPOS. The box of “First record has field names” shall not be ticked. In Point Coordinates, select the correct field for x, for y and for z (usually “field_2” for x, “field_3” for y and “field_4” for z). Points can be styled using the “Categorized” style in “Symbology”, using “Field_5” as value, or using a Rule-based symbology using the category (field 5) as filter.
Linework is created by connecting points having same description and belonging to the same physical feature. All line and polygon features are created as lines.
The Initial Linework for the Survey Area is also stored temporarily in

Note: The line shapefiles / Geopackages shall be in CRS: TM AUSPOS¶

Final working drawing Shapefiles / Geopackages are created from the Initial Linework of Survey Area.
As the Surveyor draws all features as lines (both for lines and polygons features), the following actions shall be done:
1. If features are lines:
• Export the shapefile / geopackage into the final working drawing folder (Final WD), in separate folders according to its type (e.g. BLDG, FENC, ROAD, etc).

2. If features are polygons:
• Lines shall be converted into polygons: 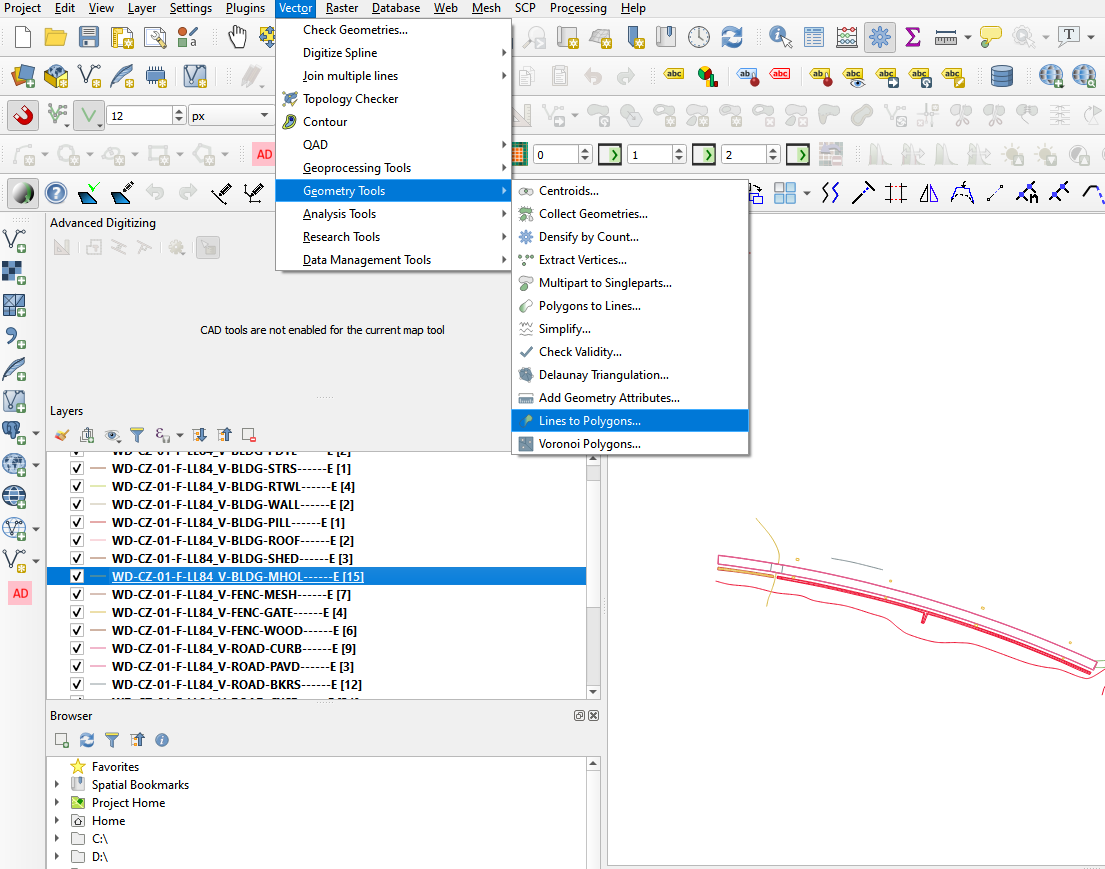 The new window for “Lines to Polygons” conversion will appear: 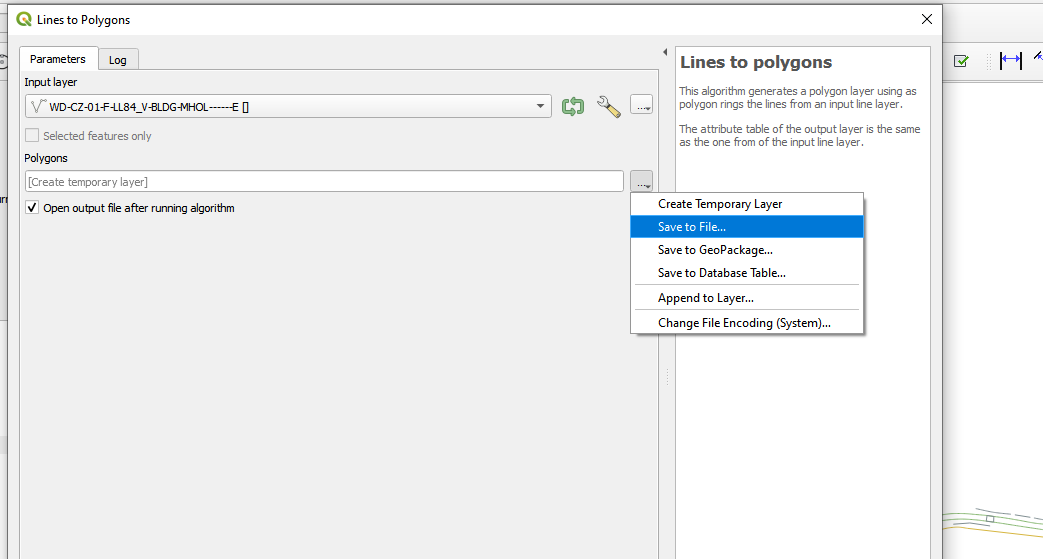 Once all the shapefiles / geopackages are exported in Final WD, for each of the newly exported layers the Topology Checker Tool shall be used.

Linework for the whole Survey Zone¶ 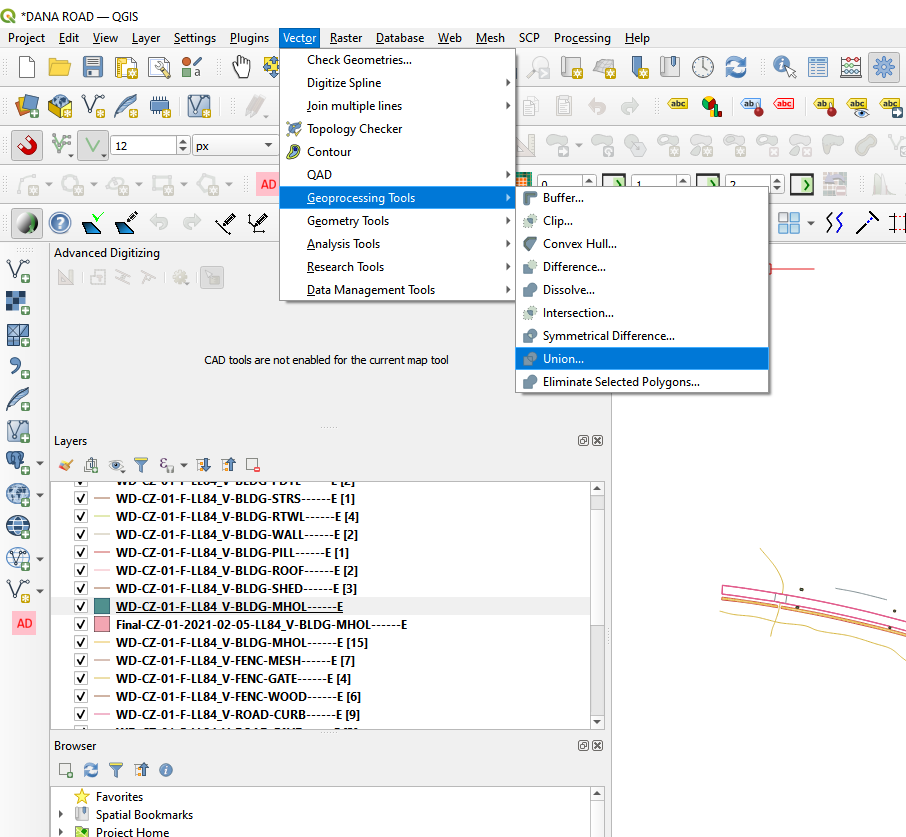 The new window for “Union” will appear: 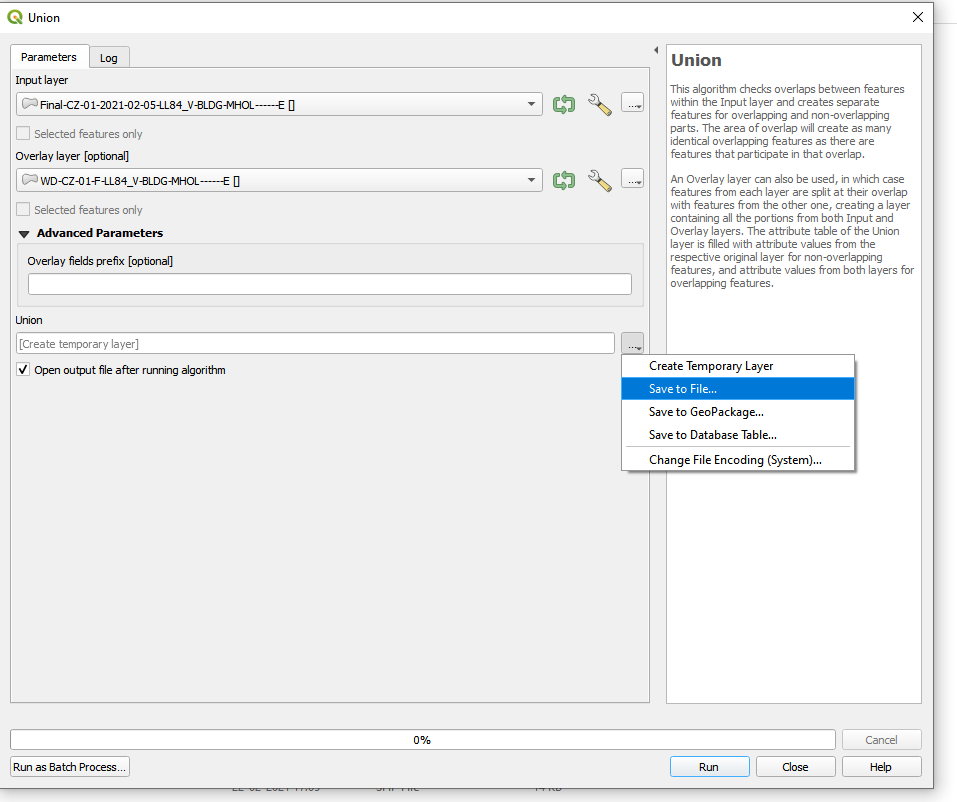 Save the merged shape file in the correct location in Final folder as D: > Survey > Zone-Survey Number > Final (eg . D: > Survey > GB-01 > Final)
Date in the name of Final Shapefile / Geopackage needs to be updated.
Once the merging operation is completed, the copy of Master shapefile / geopackage is deleted from the Temp folder.

The topology checker is applied again on the merged shapefiles / geopackages.
The “id_field” shall be removed from the attribute table.

5. Note about Shapefiles and Geopackages¶

All the above works are usually done using shapefile format, in QGIS latest version (3.16.3).
The Geopackage export is done in QGis versions older than 3.12 (e.g. 3.4, 3.6, 3.8, 3.10) so that the lines are not saved as “Multilines” but as “Lines”and polygons are not saved as “Multipolygons” but as “Polygons”. This is very important to be noted, as Gisaf database does not accept the Multipolygon and Multiline geometry types.
A different way to create "Polygons" is to use the command Vector -> Geometry Tools -> Multipart to Single Parts and apply it to the layer: from "Multipolygon" it will become "Polygon" (check in layer Properties).
As on 13 March 2021, Gisaf can accept Multipolygon layers, because the command "Multipart to Single parts" has been integrated into the importing command (see Redmine ticket #11691)